On January 12th, I attended the annual Armed Forces Chaplains Board (AFCB) in Washington, DC.  It is the one time each year that the military Chiefs of Chaplains (Army, Navy – including Marines and Coast Guard, and Air Force), all their deputies of the Reserve Components, and lead chaplain recruiters gather together– in short, the whole gang is there.  Their purpose; to brief the sage assembly of chaplain endorsing agents from 200 different faith groups who endorse chaplains for the US military.  It is an important meeting, and one that I enjoy attending each year.  This was my third time and I had a fresh note pad ready to take down the latest information. 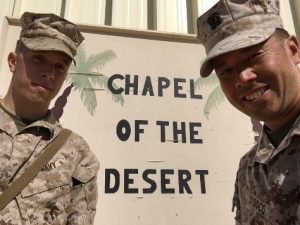 All the chaplain generals (one and two star) filed in; and the executive director of the AFCB, Navy Chaplain, Captain Jerome A. Hinson, began his opening remarks. “This year’s theme is ‘The Chaplain the Military Needs.’”  As he continued, he explained how this topic meant a lot personally to him this year, because, at the very moment he spoke, his young Marine infantryman son was deployed to the island of Okinawa, with the 2nd Battalion, 5th Marines.  A “chaplain’s kid,” his young Marine son had inside knowledge of professional ministry, growing up in the home of a Navy chaplain.

Chaplain Hinson was concerned about the wellbeing of his son, and all the other US sons and daughters with him.  Checking on his son a few days prior to the AFCB, he asked him about the unit chaplain.  His son said: “We got us a good one.”  When Chaplain Hinson asked whether he’d spoken with the chaplain, his son replied, “No, but a couple of my buddies have.  One was struggling with the breakup with a girlfriend, and another had some other issues the chaplain helped him with.”  When Hinson asked what was the chaplain’s name, his son replied, “I don’t know.  We just call him ‘Chaps.’”  “That’s the kind of chaplain we need you to send us,” Hinson said, as he introduced the devotional speaker.

Curious of the name of the obviously effective Marine chaplain, Hinson decided to email his son to ask him to find out his name. At about 10:00 o’clock, after the first session of the AFCB was over, before dismissing the group for a break, Chaplain Hinson said, “Oh, by the way, my son’s chaplain is Jon Uyboco.  Is his endorser here today?”  I proudly stood, introduced myself and our church group, and claimed Chaplain Jon Uyboco as one of CBAmerica’s twelve endorsed Navy Chaplains. 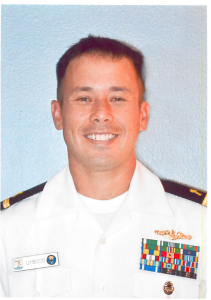 A 1999 graduate of the US Naval Academy, Jon entered the submarine force and was assigned to the USS Louisville.  There he served as Protestant lay leader while on undersea operations. (How many of us can say we’ve led a Bible Study under water?)  He then became the Nuclear Engineering Officer Program Director at Pearl Harbor.  There he started and co-led a Bible Study under the auspices of Officer’s Christian Fellowship. Along the way, he met Suzanna, who was raised in a military family.

In 2006 Jon deployed to Afghanistan as member of an embedded training team where he coordinated improvements to three US/Afghan bases in northern Afghanistan.  While there, he led Bible Studies and conducted a memorial service for a suicide while awaiting the arrival of a military chaplain.

Eventually, Jon left active duty and moved to Southern California to attend Talbot Seminary and begin professional ministry in our Pacific Church Network (PCN). There, he served on the staff of Grace Church of Glendora, and then as Interim Pastor of San Antonio Heights Community Church in Upland, where he was ordained and commissioned into the Navy Chaplaincy in 2014.

Following this overseas deployment, Jon and Suzanna will be assigned back to Jon’s Alma Mater, the US Naval Academy at Annapolis to minister to the midshipmen and staff of that venerable institution. 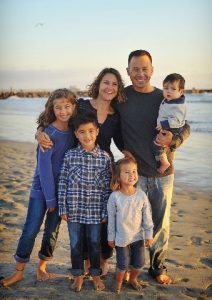 Until then, will you join me in praying for Jon, as he serves his deployed Marine battalion in the Pacific, and for Suzanna, as she cares for their four children outside Camp Pendleton? You can pray for health, stamina, loving long-distance relationships between Chaplain Uyboco, Suzanna, and their growing family.  While at it, remember the other 11 CBAmerica endorsed military chaplains serving Sailors and Marines around the world.  They are part of some 178 chaplains endorsed by CBAmerica.

For more information about CBAmerica chaplaincy ministry, go to www.cbamerica.org/chaplaincy to find other inspiring stories of faith on the front lines of ministry; in the military, and in civilian sectors.   If you sense God calling you into chaplaincy, contact our Director of Chaplaincy, Andy Meverden, at chapandy@cbamerica.org.