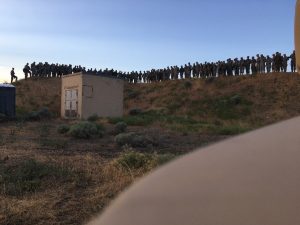 During Annual Training I offered daily morning prayer on a hill in the middle of our Brigade Support Area (BSA).  Every morning I would stand there at 0600.  Sometimes I would have one or two Soldiers come up to pray and some mornings there were none.  However, it was right during breakfast where all the Soldiers had to walk by to get their food.  On the last day I thought to myself, “No one will show up today because everyone’s focused on packing up and getting out of here.”  However, I was convicted that I needed to be faithful until the end and be where I said I would be.  As I approached the hill I noticed an unusually large gathering at the foot of the hill and figured they were standing in line for chow.

As I ascended the hill, to my amazement they all began to follow me.  When we reached the top 81 Soldiers lined the hilltop with the sunrise as the backdrop.  It was a moving sight.  While they may not have joined me the other days they showed up to express their gratitude (with prompting from the Command Sergeant Major (CSM)) for my daily presence on the hill.  I trust it served as a visual reminder of God’s presence and pointed others to Him. 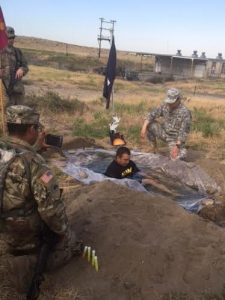 During Annual Training I was making my rounds when Specialist (SPC) Jacinto pulled me aside.  He wanted to talk about spiritual things and felt the need to draw closer to God.  He desired to have peace with God and with his family.  I could tell he had an open heart and through the course of our conversation he repented of his sins and placed his faith and trust in Jesus Christ for forgiveness and salvation.  After we prayed he said that he felt like a burden had just been lifted off his shoulders.  As we stood there rejoicing in his new birth we just paused and said, “What now?”  Immediately my thoughts turned to the Scriptures and the command to be baptized.  I asked him if he would like to be baptized and he responded, “That’s exactly what I was thinking.” 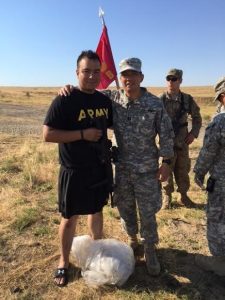 After we discussed the symbolism and meaning of believer’s baptism, the planning began.  With the support of leadership, we scheduled a day, time, and place for the event.  In faith, my chaplain assistant packed two plastic baptismal liners for Annual Training, trusting we would have occasion to use them.  Indeed!  Now we just needed a hole and water.  I instructed SPC Jacinto that he would be responsible for digging his own grave in symbolizing the putting to death of his old man.  The night before the baptism he began digging.  However, the ground was very hard and rocky.  Jacinto, together with the help of a wrecker, dug a huge trench in the ground.  The next day we employed one of our water tankers and filled the hole in just a few minutes.  With the Commander, CSM and about 30 other Soldiers in attendance, Specialist Jacinto made a public profession of faith and was baptized in obedience to our Lord.

During Annual Training I was setting up the tent that would serve as the chapel in our BSA.  I wanted to fly the chaplain flag to signify the tent for this purpose so I attached the flag to the side of the tent.  However, this seemed inadequate and not very visible.  As I was making my rounds one day I visited our fabrication section.  This group of skilled welders just finished a major project and were looking for something to do.  The idea came to me that I could have them make me a guidon* for my chaplain flag!  They embraced this project and hit the ground running.  Together they helped me design it and even let me make a cut on the steel plate.  It turned out beautifully and the chaplain flag now has a proper place to rest in front of the chapel.  It was even used later in the week during the baptism of one of the welders (SPC Jacinto). 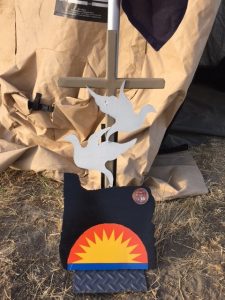 *Director’s Note: A “guidon” is typically the pole or standard on which a unit’s flag is attached. The guidon accompanies the unit wherever it goes.  Every Unit Ministry Team (a chaplain and at least one assistant) is issued a small blue flag with a white cross (or other denominational symbol – like Tablets for a Jewish Rabbi) to place at the chaplain’s tent or place of meeting – “field chapel” for identification.  In Chaplain Dong’s unit, his Soldiers blessed him with their skills and creativity in creating a portable base in the shape of their home state, Oregon, with two doves in flight attached to a cross.  Such actions are indicative of the Soldiers’ acceptance and appreciation of “their chaplain.”

Join me in thanking God for this Baptism and others (Servicemembers, inmates, inpatients, etc.) by CBAmerica chaplains in the U.S. and on military installations around the world! Pray for continued bold and faithful Gospel witness.

For more stories of ministry by CBAmerica chaplains, check out our webpage a www.cbamerica.org/chaplaincy. For information on endorsement for chaplain ministry, contact Andy Meverden at chapandy@cbamerica.org.