Between a Rock and a Hard Place 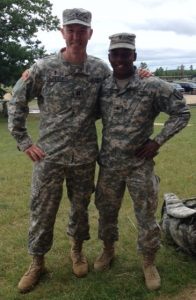 Between a Rock and a Hard Place: A Seeming Impossible Situation

Last quarter, I had a special need during our Annual Briefings that was met by a gracious God. I was asked at the last minute to give the suicide prevention brief for the Battalion. In addition to this tasking, I had to perform a wedding that afternoon.

In order to accommodate my schedule, the unit rescheduled all of the briefings for that day. In addition to these details, it was my last drill with this particular unit and I happened to be joined by the incoming Chaplain. Just as I was stepping up to the podium to give the brief, I was notified that there was a soldier in crisis down the hall.

For a moment I froze – what was I going to do? There were about 200 soldiers waiting to hear the brief, the unit had rescheduled the day on my account, I had a wedding to perform … but I had to minister to the soldier. I had a special need at this moment that I had not planned for.

Just then, I realized my need was already met by the LORD. His caring hand moved everything into place. Remarkably, not only was it providential that the incoming Chaplain was with us that day, but in addition, he informed me that he had just finished training on the brief and would be happy to give it.

My need had been supplied and by God’s grace, I was able to minister to the soldier in crisis. In this also the LORD supplied. He gave me just the right words to turn him from suicidal thoughts to taking control of his life and taking positive steps to change. While the soldier was not a Christian, I was able to point him to the One who was there for those in need – both small and great. He did not know that I was experiencing this reality at that very moment!

For more stories about CBAmerica chaplains, go to www.cbamerica.org.  To learn more about what it takes to be endorsed as a reserve military chaplain, contact Director of Chaplaincy, Andy Meverden, at chapandy@cbamerica.org.