Discipleship in the Desert 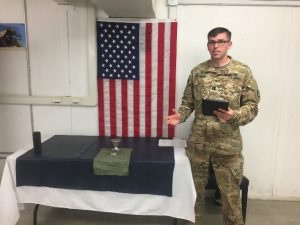 US Army Reserve deployed to Kuwait

This quarter I launched a discipleship huddle after wrestling with the Lord about it for a couple of months. The intent of the huddle is to disciple individuals into leadership. Through weekly meetings, we would explore techniques on studying the Scripture and growing in our faith, small group leading, discipleship, and accountability. Once their deployment time or the huddle came to an end, they would be equipped to lead small groups and disciple others.

The problem I faced, and the question I continually asked myself, was, “Do I have enough time to actually do this?” But the more I tried to push off the decision, the more it burned in my heart. Finally, I gave it over to the Lord and made an announcement on a Sunday morning to see if anyone would be interested. Three Soldiers talked to me after the service, and our huddle was born. 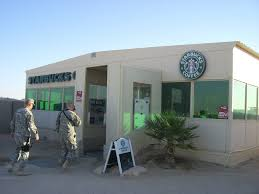 We are now up to 5 Soldiers, with ranks from SGT (Sergeant) all the way up to LTC (Lieutenant Colonel), who gather together every Monday night at the Starbucks in Camp Arifjan*. They take the huddle more seriously than I would have ever imagined, making it a priority amidst their busy schedules. I am continually humbled by the way God is working in their lives, and how eager they are to be challenged and grow.

This has bled into both their professional and personal lives. Several of the Soldiers now look for ways to talk about the Gospel with their peers. Others are trying to change their leadership styles to more closely reflect the love and grace of Christ. Still others have expressed a desire to step up and lead in Bible study and chapel. 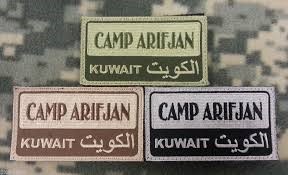 Two of the Soldiers now regularly lead my Bible study on Tuesdays. We are currently working our way through the Gospel of John, and for the first time they are developing a study and questions from the text itself.

One of the Soldiers recently began a Bible study for a group of unbelievers in his company. There were a few Soldiers who expressed an openness to looking at the Bible, and so he received permission to meet in a classroom at his unit and hold the study. He has been greatly encouraged by the questions they are asking and the opportunities he has had to point them to Christ.

Another Soldier feels the call to ministry, and has jumped at every opportunity I have given him to lead our small group or our worship team. He is excited about the ways in which he has been challenged to grow in his faith and understanding of the Word, and can’t wait to return home to reengage his church.

I have found that no matter how tired I am, or what kind of day it has been, Monday nights are a highlight of my week. It’s a chance to witness first hand God’s amazing grace, and to partner with the work the Holy Spirit is already doing in these Soldiers’ lives. The huddle has also been a force multiplier for me, and what I have seen happening in this group is God equipping Soldiers to do His Kingdom work in our AOR (Area of Responsibility), and doing it in ways that far exceed my own gifting or capabilities.

When we make disciples, those disciples become force multipliers for the Kingdom Mission. I am thankful for the opportunity to be a part of these Soldiers’ discipleship journey.

*Due to its central location, Camp Arifjan, Kuwait has a few extra MWR (Morale, Welfare, & Recreation) amenities; Subway, Chili’s, and Starbucks are among them! Many of his units, however, are in much more austere locations.

More stories of real-time chaplaincy ministry near and far, can be found at www.cbamerica.org/chaplaincy. For information on chaplaincy endorsement, contact Andy Meverden, Director of Chaplaincy, at chapandy@cbamerica.org.