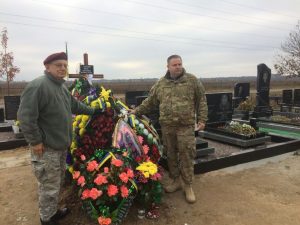 Several organizations in Ukraine are working to provide care for their Veterans who are engaged in what they call ATO – Anti-Terrorism Operation; which means they see the Russian involvement in Crimea and Eastern Ukraine as Terrorism. These organizations are also trying to provide training in PTSD (Post traumatic stress disorder), and battle (moral) injury, to chaplains; and ministry to widows and orphans of war. 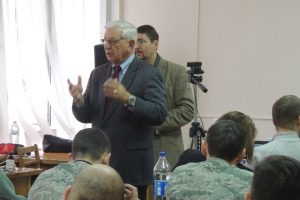 So, as Associate Staff of CRU’s military International ministry this is my second trip over in cooperation with other American organizations. My first two days were basically lectures at a Kievan University speaking to mental Health providers, military chaplains, and other Ukrainian military personnel.

Days three and four were spent doing seminars at two different military bases, and a civic presentation hosted by the Mayor of a city outside Kiev. I did three separate sessions: one for all military, one for all female military, one for clergy including some Orthodox priests, with chaplains.  That night I met with widows of soldiers killed. The last day, I did two separate meetings with widows, some having lost their husbands at the front the week before. 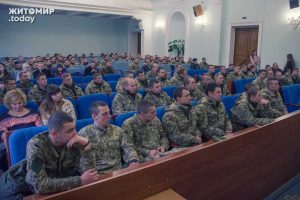 Since the Maidan Square revolution gaining their freedom from Russian political domination in 2013, they have had over 6,000 military deaths.  This means there are around 5,000 widows and fatherless children left behind.  Of course, Putin’s answer to their Freedom was taking Crimea and the Eastern slice of Ukraine, done by what Putin calls, “Ukrainian rebels”.

I find the Ukrainians spiritually very open to the gospel but still in many ways bound to their Soviet era humanism, mixed with the only religion they know, the Orthodox Church. But this war has broken down all the barriers, and traditional thinking. I must say, it is the union of Baptist Churches that are providing much of the training and expertise in raising up an all-volunteer military chaplain force.  It is such a privilege to be asked and able to go provide training for chaplains and minister the comfort and reality of the living Christ. 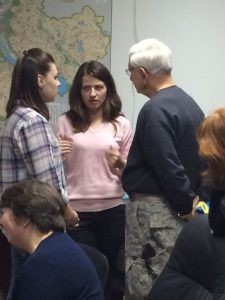 Here are a few photos from my time. I am with Chaplain Visili, (above) who just lost his friend in the war and officiated his recent funeral.  We are at the burial site together. The photo of me speaking with a young woman in pink (right) was a lady who three days before had her husband’s funeral. This occurred at the last widows meeting. My interpreter is Chaplain Visili’s wife.

Join Chaplain Hicks in praying for the people of Ukraine as they struggle against Russian encroachment and occupation.

War, in whatever form it occurs, leaves devastation, hurt, and pain. Some of this damage is visible and physical, much is invisible, internal, and spiritual.   Godly, trained, Christian Ukrainian chaplains are needed to address and facilitate healing of the spiritual wounds of this ongoing war.

I thank God for wise, Veteran chaplains, like Bob Hicks, who are still willing to enter hazardous duty zones to share with our allies the message of hope and healing through Jesus Christ. Pray for their health, safety, and effectiveness as they run to the sounds of the guns to help heal the invisible wounds of war.

For more stories of bold and courageous ministry by CBAmerica chaplains go to www.cbamerica.org/chaplaincy .