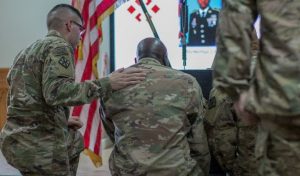 On 14 NOV we lost one of our Senior NCOs from the 306th Engineer Company. The death was non-combat related, but the effect of his passing was felt widely throughout the ranks. He was a full-time Soldier (AGR*) in the unit for almost 6 years, and had a huge hand in preparing them for deployment.

The death of a Soldier launched us into a flurry of battle drills, and as the Chaplain, I found myself running point on many of the actions. For those in the military, the Memorial Ceremony is a sacred event. It is essential to properly honoring the Fallen, and allowing the unit to grieve and move forward. As a result, the demands of the Command are extremely high, and all eyes are on the Chaplain because it falls within his realm of expertise. This was no exception, especially because this Soldier was the first (and only) loss we experienced during our deployment.

During the process, God was incredibly gracious. He brought a lot of key staff members together who could handle the tasks that I assigned them with ease, and often went above and beyond in order to solve the many issues that inevitably crop up. Thankfully, Andy** had connected me with a fellow CBA Chaplain prior to the deployment who sent me a Memorial SOP (Standard Operating Procedure) that I was able to use in developing our own unit SOP. With that, the Theater SOP, and lots of prayer, I felt as prepared as I could be while in a position of leadership when the rest of the unit was reeling with disbelief and pain.

Soldiers and leaders alike were open to prayer and conversations during this time. Emotions were raw, questions abounded, and I was able to continually go back to Scripture in an effort to make sense of circumstances and provide true hope and peace to those involved. Memorials may be unwanted duties – because no one wants to experience a loss – but they are truly an honor to be a part of. God opened the doors to some gospel conversations with Soldiers who had never been open to those discussions before. Without a doubt, seeds were planted and I am trusting God to continue watering until they bear fruit.

For more stories of ministry by CBAmerica chaplains, military and civilian, go to www.cbamerica.org/chaplaincy. To receive information on endorsement, contact Andy Meverden at chapandy@cbamerica.org.

**Andy – Part of my role as endorser is to support chaplains by providing ministry resources and networking them with other chaplains. In this case, I connected Chaplain Sean Callahan with senior Chaplain Dan Rice who provided current documents and guidance in Theater, prior to this sad event.