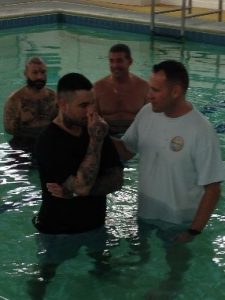 By Chaplain Dru Nelson, US Navy

A couple months ago, I had the honor and privilege of baptizing three Veterans at the San Diego VA Medical Center. Two weeks prior to the baptism, I had led one of the veterans pictured to Christ.  I met the other two through various interactions; one through a weekly Bible study and the other through “deck plate*” ministry.

After the initial veteran gave his life to Christ, he began to read a Bible that he had been given.  When I checked in with him the following day, he had already read the first two Gospels, and expressed the desire to follow in obedience to Jesus’s command for baptism.

He asked if I could baptize him at the VA. I let him know that to my knowledge, full immersion baptism had not happened at that facility, but that I would see what I could come up with. After pulling some strings and a lot of persistence, we were able to lock-on the therapy pool.

Once news of the upcoming baptism spread, two additional veterans joined in. One of them also dedicated his life to Christ, while the other was already a Christian, but had not been baptized as an adult.  The three veterans in the picture represent the Navy, Marine Corps and Army. The three men had served their country honorably within each service and are now engaged in a life changing relationship with Jesus Christ.

Notes: *Deck Plate Ministry is a Navy term for work place ministry on board Navy Ships – the “deck plate” being the “floors” on ships and other Navy facilities.  I used to call it “ministry by wandering around.”  It is proactive incarnational ministry in the military context.

While completing his Clinical Pastoral Education at the San Diego VA Medical Center, Chaplain Nelson shared the Gospel with Veterans eager to acknowledge and follow Christ as Savior and Lord. As clinical chaplain and patient advocate, he responded to these requests for baptism by approaching the hospital administration who eventually cooperated with the Veterans’ request.  I thank God for the change of attitude and accommodation of the “free exercise of religion” in the Veterans Health Administration.  Pray for continued transformation of that huge bureaucracy as they seek a new national director of the VHA chaplain service to replace retiring Chaplain Michael McCoy.

Chaplain Nelson is one of 15 Navy chaplains (13 active duty and 2 reserve) endorsed by CBAmerica. Pray for them as they serve Navy, Marine, and Coast Guard personnel on, under, and over the sea, and at Naval and Marine Corps installations around the world.

The Navy is seeking active duty and reserve chaplains. For information on endorsement in the sea services, contact Chaplain Andy Meverden, Director of Chaplaincy at chapandy@cbamerica.org.