Matters of Life and Death 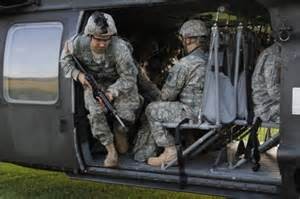 By Andy Meverden, Director of Chaplaincy

“It has been a difficult year for the 2/101 CAV (Air “Cavalry” Unit with helicopters). In February 2015 we lost a young Soldier to suicide. In March we lost a Soldier who fell asleep at the wheel while driving in to drill. In May we lost a young Soldier due to a motorcycle accident. Yet, in all of these events, God has provided abundant opportunities to support Soldier’s families, grow closer to our Squadron’s Soldiers, and share the love of Christ.

Two of the Soldiers and their families are professed Christians which presented the opportunity to share the gospel with hundreds of Soldiers during counseling, funerals, and ceremonies. Everything has a cause. Many times the cause is our own poor decision-making, but our God has the amazing ability to give glorious purpose to all things!!”

Each ministry report form asks chaplains to identify at least one blessing.  Matt continues: “God has continued to present opportunities to be involved with community events as a Chaplain representing the Military. This includes Iron Sharpens Iron Men’s Ministries, The National Day of Prayer, Grace Race Buffalo, memorial dedication ceremonies, and tomorrow 6/6/2015 I will have the honor of giving the invocation for a flag pole ceremony at a park in Niagara Falls, New York.”

I love Matt’s youthful enthusiasm.  He sees the problems facing the younger generation of Guard Soldiers, so he crafted a new ministry program: “In January 2015 I initiated a new Religious Education program. The initial stage of the training includes basic critical thinking. Please pray for this program as God develops critical thinking skills and opens doors for [spiritual] conversation with our young Soldiers.”

Pray for the Holy Spirit to sustain and guide Matt and the other 94 active and reserve CBAmerica military chaplains distributed across the US, in four overseas locations, and on ships cruising in hostile waters, as they deal with matters of life and death.

Contact Andy Meverden, CBAmerica’s Director of Chaplaincy, for information on what it takes to minister in specialized military and civilian settings; fulltime, part-time and volunteer. Email: chapandy@cbamerica.org