My Brother’s Faith: Understanding the Beliefs of Others Without Compromising Your Own 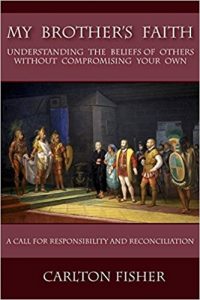 Fisher, Carlton. My Brother’s Faith: Understanding the Beliefs of Others Without Compromising Your Own. Wetumpka, AL: Peace Fish, 2014.  308 pages.

The drive to love and its opposite—fear—is predominant in Carlton Fisher’s approach to understanding the others’ religious worldview. In his book, My Brother’s Faith, he emphasizes that love for the other drives out the fear of the unknown. The one who is adept at loving improves personal resilience and understands the other’s spiritual practices without compromising personal beliefs.  Environment and heredity shape a worldview.  A spiritually mature person is able to find satisfaction in relationships, purpose in life, and comprehension of his own worldview.  Fisher’s volume is summarized in eleven words: Understanding a different worldview requires a clear comprehension of your own.

Fisher instructs the reader to understand the context of his spiritual health by posing the following questions: Where and when are you from?  Who and what do you come from?  How do you fit in that source?  The answers to these questions establish a three-continuum scale operating simultaneously: 1) the stages of spiritual growth, 2) the stages of love, and 3) the level of certainty versus mystery in religious practice.  Using an introspective understanding of these scales, Fisher constructs a framework to approach the beliefs of others and an approach to disparate people as a whole.  Finally, the author pulls the various strings of thought together to make sense of the spiritual journey.

Spiritual maturity, the first scale, is lofty and takes time. Much like other cycles of life, spirituality exists in loosely defined stages: disorder, duty, doubting, and discovery. Disorder is the infantile stage of seeking happiness or entertainment over meaning.  Through maturation, spirituality transitions to duty attempting to apply meaning to ritual practices. Some people transition from duty to doubting; doubting allows for the ‘why’ questions.  The doubting stage is difficult and leads to three ends: a return to duty, an abandonment of faith practice, or to a level of greater maturity—discovery.  Discovery is still a search, yet the goal is to learn, and the fear of the unknown is less important.  A person can move in and out of these stages over a lifetime.  He may practice in duty and then doubt and after may draw on discovery throughout the course of a day or in a matter of a few minutes.

The stages of love are similar to spiritual growth. Fisher, drawing on Bernard of Clairvaux, describes the growing ability to love in four ways: 1) love self for self’s sake, 2) love God for self’s sake, 3) love God for God’s sake, and 4) love self for God’s sake. The lens of love changes as we see others and ourselves the way God views us.  Hard work and time are necessary to strengthen the ability to love and move away from fear—or at least not to allow fear to have control.

Fisher’s third scale calls a religious practitioner to own his own faith. It is this scale that largely shapes a religious worldview.  Although a group of people may commit to a similar faith, each approaches the door of his faith with unique feelings, thoughts, and nuances.  For some, faith has little to do with certainty, rather faith is embracing wonder and mystery.  Others would say a handful of ideas are certainty in religious faith, but the existentialism of wonder and mystery are more important.  While some have much more certainty in faith and do not spend much emotional energy wondering about supernatural mystery.  The final group would leave little room for mystery saying that real faith and real knowledge go hand-in-hand.

After the faith practitioner identifies his level of certainty versus mystery, adherents to various religious faiths fit somewhere on a nuanced scale identifiable by four signpost markers, which is Fisher’s approach to the beliefs of others. ’My worldview is the only way’ represents the view of others outside the realm of another’s faith as error.  ‘My worldview is closest to the truth’ embodies those who concede that people with another worldview may know enough truth to experience God’s grace.  ‘My worldview is more enlightened’ characterizes people who do not generally make absolute truth claims and who possess a high tolerance for another worldview.  Lastly, ‘all worldviews are relative’ represents those who reject exclusive religious truth claims and validate any worldview as long as it does not hurt others.

The matter of respecting others, Fisher’s approach to people, is often more connected to an individual’s spiritual and emotional maturity than his worldview. Someone may adhere to an exclusive faith, yet still be an inclusive person.  We do not have to respect beliefs that we do not agree with to respect the person who holds such beliefs.  It is quite another matter to hate the dogmatics and the person.  Fisher argues judging others solely on ideology risks being offensive to those who hold such beliefs and hampers the process of building relationships.  When self-assessing solely on systematic theologies, religious practitioners miss opportunities for deeper self-development and frustrate potential personal growth. If the agenda for peace is to make others homogenous with one belief system, then the pursuit of peace will fail.  It is not necessary to have the same worldview to get along, but it is necessary to seek understanding.  Fisher advocates the liberal use of stereotypes acknowledging the use as normal human behavior.  He urges the development of an abundance of stereotypes allowing the interpretive individual to draw on a large breadth of categories to generate sympathy.  Fisher simply states, “We are complex.”

Finally, Fisher applies his exhortation to responsible religious practice in the process of forgiveness leading to reconciliation. If reconciliation is to take place, one has to start with the other’s perception.  If the wall is to be torn down, the spiritually mature and aware person begins by removing a brick from his side of the wall.  When people on the other side see a brick or two removed, perhaps they will begin to remove the bricks from their side.  As the wall is lowered, all may be able to look across the divide and see each other as they really are.

Fisher’s work is well thought out providing an honest framework for interacting and seeking understanding among various religious worldviews. In fact, a careful study of this work is an extremely helpful catalyst in understanding a variety of conflicting worldviews.  Consider the debates around Church and State or the ideological conflicts between Republicans and Democrats.  What if participants applied Fisher’s principles to the historical conflicts among whites and blacks, Catholics and Protestants, or Christianity and Islam?  Our nation needs the help of mature, seasoned religious leaders.  Chaplains are trained and poised to provide leadership in peace-making and peace-building.  Chaplains can stand against fear and exemplify the love of God and love of man.  Carlton Fisher’s book, My Brother’s Faith, is indispensable for the professional growth of every chaplain. 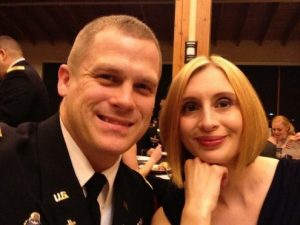 Ch (Capt.) Andrew E. Calvert is a ten-year veteran of the United States Army. He is a 2008 graduate of Dallas Theological Seminary, Dallas, Texas, with a Masters of Theology and a 2002 graduate of Angelo State University, San Angelo, Texas, with a Bachelor of Arts in Interpersonal Communications. Chaplain Calvert is endorsed by CBAmerica.