As a retired Army chaplain, I continue to serve our Veteran community. Occasionally called on to visit the sick and dying, I have opportunities to honor the failing and the fallen.  On December 2nd, seven hours before he breathed his last, I read Luke’s account of the Crucifixion (Hill #1) and prayed my last prayer with Private George “Joe” Taro Sakato, WW2 Veteran, and recipient of the Congressional Medal of Honor (CMOH) in his Denver home.

Born in February of 1921 in California of Japanese immigrant parents, “Joe” first tried to enlist in the Army Air Corps in 1943 after the outbreak of WW2. He and many other “Americans of Japanese Ancestry” (dubbed “AJAs” by the US War Department) initially were rejected by local draft boards, and classified, “4C” (Enemy Alien – “Nisei”).  On the Nisei Monument in Denver’s historic Fairmont Cemetery’s Veteran Section, where Joe now rests, it reads: 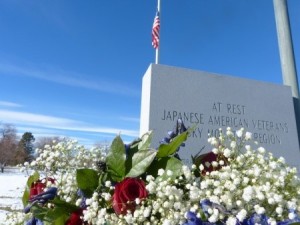 “Deeply aware the cloud of suspicion hanging over them in the early days of WW2 could be dispersed only by a demonstration of loyalty, Americans of Japanese descent (Nisei) petitioned in 1942 for the right to serve their country. America offered them the opportunity, and the Nisei served with distinction and valor in the 442nd Regimental Combat Team in Europe, in military intelligence units in the Pacific, and elsewhere.  More than 30,000 Nisei bore arms in WW2 and Korea, shedding their blood on such far-flung battlefields as the Arno and Bruyeres, Guadalcanal, Myitkyin and Porkchop Hill.  It is to those who made the supreme sacrifice in demonstrating that Americanism is not a matter of Race or ancestry that this monument is dedicated.”

January 16 was a cold, clear Colorado morning when the funeral procession stepped off, led by a group of senior military officers, followed by a color guard. The 101st US Army Band of the Colorado Army National Guard slowly beat cadence in solemn military tradition.  Following were two marching platoons of infantry soldiers and cadets of the Civil Air Patrol; Infantry in honor of Joe’s service as an Army Infantryman, and aspiring Civil Air Patrol cadets in honor of Joe’s original desire to join the Army Air Corps.  Next in file was an open bed funeral carriage with flag-draped coffin, pulled by two massive, manicured draft horses.  Three steps behind walked two chaplains, both honored to walk this last mile with Joe.  Family in automobiles followed; with a third platoon of Infantryman serving as rear escort. 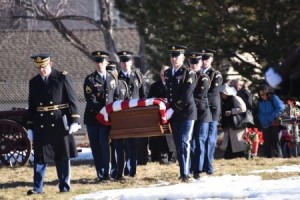 After the slow mile-long march, we assembled at the road nearest the gravesite. Sending the junior chaplain ahead to the grave, I oversaw the movement of our fallen hero.  Stepping ahead, I slowly led the casket bearers to the grave.

As I saluted the moving casket, I surveyed the setting; ensuring that everything and everyone was in place, according to time-honored military tradition.

Directing a last minute adjustment of people standing too far from the grave, I took a deep breath and began. “Good morning. My name is Chaplain Meverden, and I want to welcome you to Fairmont Cemetery… Today’s burial takes place in the shadow of the Nisei Monument, honoring the service and sacrifice of Americans of Japanese descent…Each and every one of these resting in this hallowed ground, hold something in common…when their nation called in a time of need, they raised their hands and said, ‘Send me!’  And such is the life and legacy of our brother, Private George Taro Sakato, we lay to rest today.” 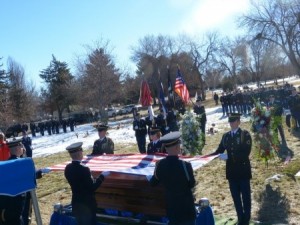 After Scripture readings from Ecclesiastes chapter 3, John chapter 14, and 2 Timothy 4:7-8 I said, “Let me encourage you: If George is in Christ, and Christ is in you, then George can’t be far.” I concluded with a prayer of committal and benediction.   The religious portion was complete.  Military honors followed.

I typically review the Veteran’s military service, gleaning coded information from aged discharge papers (DD214). For this preparation, I spent over fifteen hours, watching videos, reading transcripts of historical interviews, and reading history books.  Most importantly, I reviewed the notes I took over the last seven months of hospital and home visits I was honored to make with Joe.  I even memorized the information listed on the Medal of Honor coin Joe had given me. 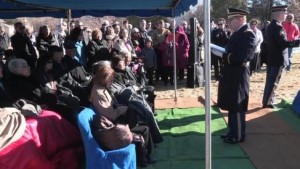 Joe was an unlikely Soldier. Initially unable to enlist in the Army Air Corps, a year later he was accepted, but sent to Camp Blanding, Florida for Army basic training.  Though taken by surprise, Joe knew he couldn’t turn back.  Weak and small in physical stature, he couldn’t complete all the stations of the Obstacle Course.  He didn’t pass weapons qualification.  How he would survive in the infantry, he didn’t know.  Assigned to the 442nd Regimental Combat team in Italy, he was moved to France.  After three months in combat, his unit was ordered to take Hill 617 outside Biffontaine, as part of an operation to rescue 200 Soldiers of the 141st Infantry Regiment trapped by the German army.  In the attack, he lost a close buddy which enraged him.  With a Thompson submachine gun, he charged up the hill, encouraging his squad and platoon to follow.

Private George T. Sakato distinguished himself by extraordinary heroism in action on 29 October 1944, on hill 617 in the vicinity of Biffontaine, France. After his platoon had virtually destroyed two enemy defense lines, during which he personally killed five enemy soldiers and captured four, his unit was pinned down by heavy enemy fire. Disregarding the enemy fire, Private Sakato made a one-man rush that encouraged his platoon to charge and destroy the enemy strongpoint. While his platoon was reorganizing, he proved to be the inspiration of his squad in halting a counter-attack on the left flank during which his squad leader was killed. Taking charge of the squad, he continued his relentless tactics, using an enemy rifle and P-38 pistol to stop an organized enemy attack. During this entire action, he killed 12 and wounded two, personally captured four and assisted his platoon in taking 34 prisoners. By continuously ignoring enemy fire, and by his gallant courage and fighting spirit, he turned impending defeat into victory and helped his platoon complete its mission. Private Sakato’s extraordinary heroism and devotion to duty are in keeping with the highest traditions of military service and reflect great credit on him, his unit, and the United States Army.

Though meriting the Medal of Honor, anti-Japanese sentiment for this and other heroic actions taken by Joe and other members of the Nisei units, caused his award to be downgraded to the Distinguished Service Cross (DSC). Wounded soon after in further fighting, he was returned for medical treatment and convalescence in the US.  After discharge, he moved to Denver, Colorado, married, and eventually joined the US Postal Service from which he retired. 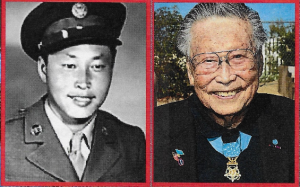 In June of 2000, after a review of many downgraded awards in the 442nd, Joe finally received his Medal of Honor in a White House Ceremony.

After I concluded my remarks, the rifle team fired three volleys, taps was played, and the US flag was folded. After the Adjutant General presented the US and Colorado flags to Joe’s daughter and other relatives, I stepped forward, recited a poem, “The Dash Between the Dates,” hugged each family member and walked away.  My mission was complete.

In one of Joe’s later recorded interviews he said: “We marched through Washington D.C to the White House. There President Truman said: ‘You fought two battles and won.  You beat the Germans, and you overcame discrimination.’”  Joe then chokes up, and finally says, “That was good.”

Following the burial, a 91 year-old fellow Soldier who was on the battlefield with Joe, said. “He wasn’t just any ordinary Joe!”