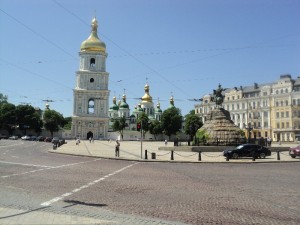 In the military, it’s common for deploying service members not to be able to disclose their intended destinations.  But when retired US Air Force Chaplain Bob Hicks told me he was heading into a combat zone, I became a bit concerned.  He told me what he could, and then asked me not to say anything until he returned and could write a “sanitized” report.  I was relieved to hear that he was safely home.  Here’s a report he said we could post.

Last month I was part of a team requested by the Ukrainian Ministry of Defense to do a seminar for their Chaplains, spouses, and other first responders serving in the “war” with Russian “rebels”.  In attendance was also various Ukrainian officers and those serving the front in other volunteer functions. This war began in April of 2014 when a demonstration was held in the Maidan Square in Kiev. This was a protest against the Russian leaning government which was turning the Independence of Ukraine into a Russian satellite. The result was President Putin occupying the Crimea and Eastern territory of Ukraine. In little over a year of conflict over 5,000 Ukrainians were killed.  One Ukrainian chaplain told me one of his chaplains was killed while posting a Ukrainian flag on the top of one their buildings. The observing chaplain was tasked to pick up his body parts!

For some background: there is no official military chaplaincy in the Ukraine.  Most non-Orthodox pastors have little education and no training in PTSD or war-time stress. As volunteers, they are not paid and have no medical coverage if wounded, injured or killed. Few have full time paid pastorates, so when they go to the front, their churches must provide for their families. The chaplains are used to shuttle supplies for soldiers and other chaplains to the front. (I took over 12 Camelbacks to give to chaplains since they are hard to find there). They also are involved in doing body identifications and facilitating transport back to their homes.

Our seminar took place at the Kiev Theological Seminary, and had about 150 registered participants. Though the original idea for this seminar came from contacts between the Ukrainian Ministry of Defense, NATO and EUCOM, the three organizations forming our team were from CRU (Campus Crusade Military Ministry), Branches of Valor, and the International Association of Military Chaplains. The three day conference went day and night with everyone housed in close proximity which facilitated many long evening discussion.  We were well care for by our hosts and the hospitality and appreciation was a sincere blessing.

I taught on Moral Injury, Wartime Stress, and Battlemind versus Homemind. The last one seemed very helpful for the spouses in attendance in helping them to understand how war changes a person. Other seminars dealt with PTSD, Spiritual Healing, and Family & Women’s Issues. CRU’s International director, former AF Academy grad and tanker pilot, LTC Martha Jones, (Ret) was a real hit with the women as she shared her experiences as a female in the military. Each of the presenters was given their own personal translator who shadowed us the whole time. So even during meals and after sessions we could continue discussions.

Chaplain Issues Addressed: We met with a Colonel from the Ministry of Defense who is trying to gain official recognition for a chaplain corps with benefits. He was very interested in how the US chaplaincy was able to do “pluralism”. This was a hot topic since the state Orthodox Church is very powerful and 80% of Ukrainians belong to the Orthodox Church. However, most of the volunteer chaplains who deploy to the front and stay there with the troops are either Protestant, Catholic or Independents. The war has thrown them all together but they have never worked together before. The Orthodox come to do services but then return home afterwards. The Evangelicals and Independents are really carrying the load and doing the daily ministry. Another issue we faced was the issue of Chaplains carrying weapons (and using them). Some were, others not. Many Baptists in Ukraine are pacifists and it was quite a hurdle for many to even serve in the military. So some are there without the consent of their churches. Their Ministry of Defense had never addressed the issue but we referred them to the Geneva Convention since both Ukraine and Russia are signatories.

Final Reflection: When I returned home my wife asked me to describe the event. It took me some time to process my thoughts. My short version is: it is close to being one of the richest ministry experiences in my life. The participants were hungry for anything we had to share. Their spiritual life was incredible even while facing the prospect of death or occupation by Russian soldiers. I considered it one of my greatest of privileges to be there and try to help this struggling country.  In a sense, Ukraine became an independent nation when the Soviet Union collapsed. But now they are having to fight for their independence. It reminded me of our own history as a rag-tag army of volunteers fighting against the premier army of Europe, and English regulars. But I believe faith in God and His providence prevailed for us… hopefully for Ukraine as well.

Prayer: I pray for the Ukrainian chaplains and their families. I pray for their Ministry of Defense to authorize their chaplaincy. I pray there might be a positive peaceful outcome with the Russians who also face many trials and casualties.

Photos: Maidan Square Cathedral (where it all started); Ukrainian/Russian Tanks facing off at War Memorial (Ukrainian in blue & yellow); My Moral Injury Presentation; Group photo of some chaplains & Ukrainian officers. 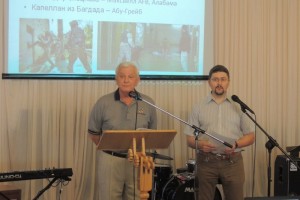 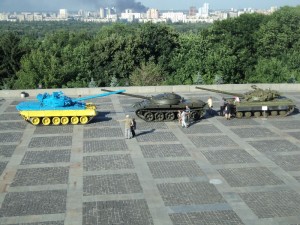