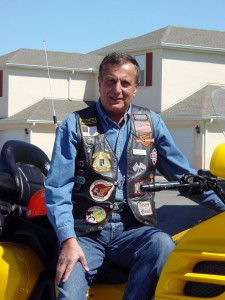 “My name is Bob Ishkanian. I am presently a CBAmerica Chaplain serving the inmates at Charlotte Correctional Institution in Punta Gorda, Florida. This is a maximum security level prison and we have some ‘bad dudes’ here. Many of the men here are in for life.

I have been working with one of the worst of the worst. This fellow, let’s call him Bill, is a retired military officer who became an enforcer for the Hells Angels Motorcycle Club. Murder was his game. When they arrested him, he had 17 loaded handguns and one sawed off shotgun on him, not in his car or in his room, but directly on him. Bill said he didn’t like to reload, that it was too much trouble. I told him he didn’t need a bullet proof vest because wherever he might have gotten shot, the bullet would have hit a gun!

Well, after befriending Bill for six months and showing him the love of Christ, he enrolled in my prison class called HEALTHY RELATIONSHIPS.  Everyone thinks this class is about friends and family relationships.  It’s really about your relationship with Christ.  Bill asked lots of questions.  Next Bill enrolled in my class called DIGGING DEEPER. God was working in his heart.  I took two weeks off for a vacation, came back to the prison and found out that Bill had demanded that one of the other chaplain baptize him.  What a surprise!!

Bill now attends our weekly Monday night worship service, carries around a giant ESV study Bible and will want to bend your ear and tell anyone that will listen as to how God has changed his heart and mind for the better. PTL!!!”  –Chaplain Bob Ishkanian

We recently visited with Bob in his home in Florida.  He shared this and other stories of the impact the Gospel is having in the prisons where he ministers.  Join with Bob in rejoicing over these who are coming to faith in Christ and experiencing radical life transformation.  Pray for him, both his safety as he works in potentially dangerous settings, as well as for hearts prepared by the Holy Spirit to respond to the message of Hope through Jesus Christ.

Prayerfully, remember Bob, and the other 160 CBAmerica Chaplains who serve in a variety of institutional settings; military, prison, hospital, hospice, police, fire, and other ministries.

For more information on how you can become a chaplain, contact Andy Meverden, Director of Chaplaincy at chapandy@cbamerical.org and visit our website at www.cbamerica.org/chaplaincy.