Outnumbered: Chaplains Team Up to Baptize 115!

By Chaplain Brian Hargis, US Army

In March and April I was afforded the opportunity to cover down (military term for “fill in”) for Chaplain (Captain) Sarah Tarpley Vesselee (www.facebook.com/sdtarpley?fref=ts), battalion chaplain for the 3-13 Infantry Battalion (BCT) at Fort Jackson, South Carolina.  The 3-13 IN is a basic combat training battalion (BCT). 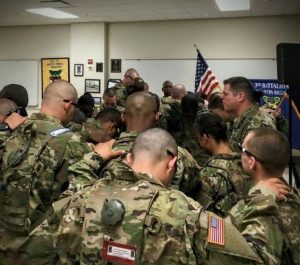 This was my first opportunity to minister in a Basic Training Battalion – something I always wanted to do.  For the first service in March, it was WEEK 1 for the Soldiers and over 200 attended the chapel service.  No doubt that numerous Soldiers received the Gospel for the first time in their lives.  So many came to Jesus that it was more than I could count.

Realizing that I was outnumbered, I was able to solicit the help of Chaplain (Captain) Rick Pak and Family for the next two services.  More Soldiers attended and many more professed Christ as Savior.

For the last week, the services had grown by word of mouth. We needed more chairs in the battalion conference room to seat 250 Soldiers.  And by this time, numerous Soldiers joined me in music, singing, and testimony of what God was doing!  Watch the video, see and hear the good reports of God working among the Soldiers! They were very eager and enthusiastic to worship the Lord and testify of His goodness. 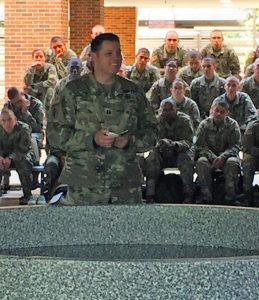 Closing the service, a line formed 50+ deep of Soldiers that wanted to hug and say, “thank you.” Because there were so many Soldiers, and I could not deal with them each individually, I asked them if they had truly received Jesus Christ as Savior to shake my hand and say, “Chaplain, I’m on Team Jesus, now.”

A female Soldier was in line visibly shaken.  She cried, hugged me and asked me to pray for her.  She said, “Chaplain, I’m a lesbian and I know it’s wrong.  Please pray that God will forgive me and change me.”  Wow!  No doubt that the Lord had met with her that Sunday morning!

Knowing that so many had trusted Christ, I prepared a sign-up for baptism. Over 100 Soldiers signed up, with many indicating that they wanted to speak with Chaplain Sarah for counseling.  Each Soldier was also given a Bible and some had already started small group Bible studies! 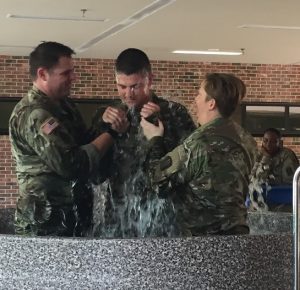 Chaplain Sarah returned and finished the services until graduation. She said that she never had so many professions of faith before, and that she was overwhelmed with counseling!

A graduation Baptism was scheduled for Sunday, 3 April 2016, in the common area of the battalion.  Drill Sergeants marched platoons of Soldiers to the mini-service with towels and shower shoes in hand!  Chaplain Sarah’s assistant filled a round baptismal pool and staged audio equipment.  We played and sang a few hymns and I preached a short sermon about the importance of biblical baptism. 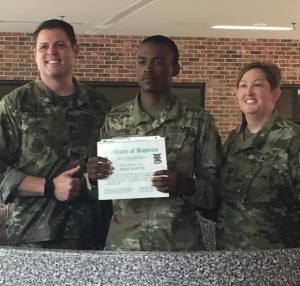 One by one, we baptized 115 Soldiers in the Name of the Father, Son, and Holy Spirit, and presented baptismal certificates.  There were so many Soldiers that I didn’t even bother to count, but Chaplain Sarah said that they had printed 115 individual baptismal certificates for those that had signed up; and when we were finished, there were no certificates left.  It was an amazing experience of receiving and celebrating new life in Christ!

A female Drill Sergeant gave me her phone number for follow-up. She is a Christian seeking God’s will and is interested in becoming a chaplain.  I was able to talk to her for several weeks following, and she is now in the process of becoming a Chaplain.

If you are interested in reading more stories of God’s amazing work in and through our CBAmerica chaplains, go to www.cbamerica.org/category/chaplaincy. For information on endorsement for chaplaincy, contact Andy Meverden, Director of Chaplaincy at chapandy@cbamerica.org.