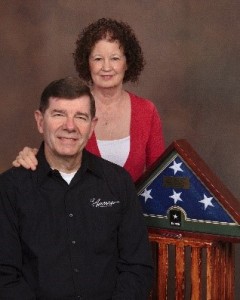 Once a month, my wife and I help out with Bingo at the Colorado State Veterans Home on the old Fitzsimmons Army Medical Center grounds.  The once imposing multi-story, stone, Fitzsimmons Army Hospital is now dwarfed by the University of Colorado Anschutz Medical Center, Children’s Hospital, the infamous over-budget VA Hospital, and dozens of other structures of this emerging “Medical City.”   Except for a newly built Army Reserve Readiness Center, most vestiges of Fitzsimmons’ storied military past, are, as we say, “history.”  But in a small section of “Fitz” is a living national treasure; a place where old Soldiers, Sailors, Marines, Airmen, Coast Guardsmen, and Merchant Marines, and their spouses come to “fade away.”

My perspective is unique.  For eight consecutive years, while serving as Command Chaplain for the Colorado National Guard, under Air Force Major General, H. Michael Edwards (Call sign: “Farmer”), the Adjutant General of the State of Colorado, I had the privilege of visiting all five of Colorado’s State Veterans Homes annually; in Florence, Walsenburg, Home Lake, Craig and the one in Denver at Fitzsimmons.  And almost always, weather permitting, we flew in by Blackhawk helicopter.  Our two-ship mission, loaded with Colorado Generals, State leaders, Army and Air staff, and me as chaplain, flew from Denver each year to visit some of Colorado’s senior Great Americans.

Imagine approaching at 150 knots, descending from cruising altitude to about 300 feet above the Veterans facility, residents and staff gathered outside, waving and clapping, as we circled overhead.  After landing in a nearby field, 10-20 passengers “assault” the gathered residents, greeting, and catching up since last visit.  The staff looks on as uniformed personnel and other civilians work their way through those able to be outside, mostly in wheel chairs.  After a time, the Facility Director invites us in for a “visit.”  I usually pushed a wheelchair-bound Veteran inside.

Over the years, I’ve met Veterans from WW2, Korea, Vietnam, the Cold War, and their widows.  Some were missing limbs.  Many bald heads bore telltale scares.  Some could not speak.  Others told stories of service in the Pacific; its jungle-covered islands, and the sands of Iwo Jima, Tarawa, Tinian, Saipan, Okinawa, Guam, and the frozen Aleutians.  I heard harrowing sea stories from Sailors, Submariners and Naval Aviators.  Others spoke of Europe, fighting across North Africa, Sicily, Anzio, or up through Italy or Southern France. Some told of the horrors of Normandy, D-Day, D+1, D+2, and the fight across France into Belgium, the Battle of the Bulge, and eventually Germany. I was surprised by the number of aviators, pilots, crewmembers, gunners and bombardiers.  Some were shot down; most of these captured and imprisoned.  Others spoke of the cold snowy mountains of the Korean peninsula, and how they fought unprepared with leftover equipment from WW2 in “Task Force Smith.”  I heard of the horrors and heroism in the jungles of Vietnam.  Some were officers, most were enlisted.  All were great Americans who shaped our history and maintained our freedom.  And I was privileged to hear their stories first-hand. These annual visits became a highlight of my chaplaincy.

As the years passed, we would return and reconnect with the resident Veterans.  Many wanted to see “the General” who would spend time with everyone who wanted to see him; even those who didn’t know he was a “General.”  The nursing staff would often take me to the rooms of residents unable to get out of bed.  There I would kneel at bedside, visit, and offer a word of comfort or prayer.  Too often on a visit, we’d ask about a particular resident, and get the sad news of their passing.  We missed seeing them, sometimes by only a few weeks or days.  That was a sad part of our visits, yet we were thankful we got to know them while they were still alive.

Typically flying to two or three Veterans Homes each day, we were “herded” by the Deputy Director of Military and Veterans Affairs, USAF Retired Chief Master Sergeant, Mickey Hunt, and Legislative Liaison, Greg Dorman.  Occasionally, I was the last one to board the waiting helicopters, but usually it was “the General” holding up departure.   Both sons of WW2 Veterans, Maj Gen Edwards and I held the sacrifice of our parents’ generation in high esteem.  We treated these Veterans and spouses like we would want our fathers and mothers treated – according to “The Golden Rule.”  Often, while walking back, “The General” and I would share stories of those we had visited: “Did you meet that Army Air Corps pilot that was shot down over Germany?”  “Yeah, and did you meet the Veteran with 17 children?”

In September of 2014, I made my last aerial visits to all five Colorado Veterans Homes.  I asked two successor chaplains to come along.  On this last visit, I decided to take my time and let the other chaplains circulate.  I sat with fewer Veterans, asked more questions and listened more patiently.  Each story was precious.   Our last stop was Fitzsimmons.  Due to the new taller buildings adjacent to the facility, our skilled, combat-proven Army Guard pilots executed safe, yet technical approaches and landings onto the grassy field between the facility and tree-lined golf course across the street.  After the visit, with angelic skill, we flew straight up 100 feet before making our signature “victory lap” while waving to the Veterans, widows, and staff below.  As I waved good-bye, a tear ran down my cheek.  It would be my last “air assault” of a Veterans’ home.

Last Wednesday, I accompanied my wife, Myra, who is the volunteer chaplain for the Rocky Mountain Submarine Veterans group.  She joined them several years ago as an associate member, and a few years later, they elected her their chaplain.  Last year I joined, as her “RP” (Religious Program Specialist – the Navy term for a chaplain assistant).  My main job is to drive her, and protect her from Sailors – just kidding!  Whenever I can, I like to help with Bingo.  I got to call the numbers once, but usually I help the residents who can’t hear or see very well.  I always come away blessed.

Today, I helped a 94 year old WW2 infantryman named Harry play Bingo.  He couldn’t hear the caller, so I touched the numbers and let him mark his card.  Sometimes I moved the card a little closer so he could reach it; just far enough so he’d have to stretch a little.  During the session, I asked him a few questions about his military service.  He struggled to tell me how he served under Patton and came ashore on the 2nd or 3rd wave into Normandy. When I thanked him for his service, he said, “I didn’t do much.” Yeah, right. He just helped save the world from fascist domination!  May God bless your remaining days on earth, until the Lord welcomes you into Heaven.

I’m thankful that God’s plan for my post-military career allows me time to visit Colorado’s State Veterans Homes!  I think it will make it easier for me, when my time comes to fade away.

*Chaplain Meverden currently serves as Director of Chaplaincy for CBAmerica, an association of 1200 churches across the US, that endorses 200+ chaplains in the Military, Bureau of Prisons, Veterans Health Administration, and Civil Air Patrol, as well as civilian hospitals, hospices, law enforcement agencies, State prisons, rescue missions, Veterans groups, motor sports and wounded warrior outreach.  His 26 years of Army Guard and Reserve chaplaincy prepared him for this undertaking, as did his visits to the Colorado State Veterans Homes.  Chaplain Andy’s wife, Myra, is a volunteer chaplain with the Rocky Mountain Submarine Veterans.  She was endorsed by CBAmerica in 2012.