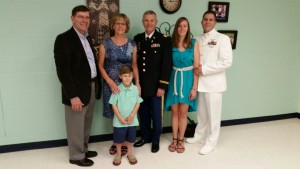 Though June 15 was his “last day on the job” as senior pastor of the USA Army White Sands Missile Range New Mexico Protestant Chapel, Chaplain (Lieutenant Colonel) Brad West, and his wife, Susan have their sights set on “what’s next?”

I had the joy of taking the West Family out to dinner, the evening before Brad’s retirement ceremony on June 4, with their daughter, Natalie, her husband and son.  I listened to stories of family travels, the challenges of separations due to Brad’s several deployments, plus discussion of hopes and excitement of the future.  It was a fun time of “pre-celebrating” the ending of a fruitful 23-year military career, and launch into next phase of life and ministry.  The love and levity of the mealtime gathering spoke volumes of the flexibility and commitment this family had to one another and to their chaplain husband, father and grandfather.

The next day, I drove 60 miles due west of Ft. Bliss, Texas to the 500-seat chapel where Chaplain Brad and Susan had ministered the past two-plus years.  I arrived early enough to present them with a framed painting of the Lamb of God set in the frame of the Cross.  On the reverse side was a Certificate of Recognition and Appreciation presented by the Board of CBAmerica for their many years of faithful and fruitful ministry service.  (See photo).

Then I found myself a seat near the rear of the chapel, as I had to leave before the end of ceremony to catch my plane home. (White Sands is not the end of the world, but you can see it from there!).  People began to arrive for the 3:30pm ceremony.  Among the first were the Commanding General and Command Sergeant Major of the Installation.  Normally, the “Garrison Commander” (a colonel) conducts such ceremonies, and when unable, the next in command steps in.  But not this time.  Today, another active member of the Protestant Chapel would officially “retire” Chaplain West, the Commanding General, himself.

While I waited, I would soon learn why.  People of all types began to filter in, Soldiers in uniform, some with their families, found their seats in what looked like their usual Sunday seats.  Civilians, workers and supervisors, recognized by their dress came in with teenagers, children, and a few infants and toddlers.  It struck me that it looked much like a civilian church, with people of all ages and stages of life.

One man came up to greet me, he must have been a chapel usher, and when he didn’t recognize me, I explained that I was Chaplain Brad’s endorsing agent (director of chaplaincy) for CBAmerica.  When I said that, he moved me to the side.  He looked me in the eyes and said, “I want you and your denomination to know something; Chaplain Brad saved my marriage.”  With teary eyes he briefly shared how early on Chaplain Brad detected a problem and challenged him to “man up” and be the head of his family.

Walking off, another person greeted me and asked if I knew how and why Chaplain West was assigned to the White Sands chapel.  Shaking my head, he explained that he had been serving on Ft. Bliss, and hour east, when the Army chaplain assigned to White Sands died by suicide.  My mental file searched back to a story about an Army chaplain who died by his own hand, and I realized it was Brad’s predecessor.  Army leadership were aware of the devastating impact on the chapel congregation, and looked for the right shepherd to come and gather and heal the stricken flock of believers.  Though not an assignment many would anticipate, Chaplain Brad West was the shepherd needed.

I sat down.  The ceremony began, the National Anthem played, and the incoming chaplain prayed, before the Commanding General (from memory) rehearsed Brad and Susan’s entire military career.  A believer himself, he quoted Scripture, and referenced his time under the preaching and pastoral care of one of the “Army’s finest chaplains.”  Following this 25 minute tribute, the chapel was called to attention, and Chaplain (Lieutenant Colonel) Bradley A. West was awarded the Legion of Merit for his outstanding decades of military service, including the rebuilding of the White Sands Protestant Chapel.

I slipped out and raced back over the white sands to the El Paso airport.  Boarding my plane, I belted in and pondered what I had just seen and heard.  I thanked God for allowing CBAmerica to endorse and field effective, godly chaplains like Brad West; and prayed that he and Susan would find new opportunities for ministry in the Northwest CB Region where they plan to settle near Bend, Oregon.

I encourage readers to send congratulatory emails to Brad and Susan at Bradley.allen.west1@gmail.com.  NWCB Churches interested in utilizing Chaplain West’s family life, counseling and pastoral skills are encouraged to contact him directly after July.